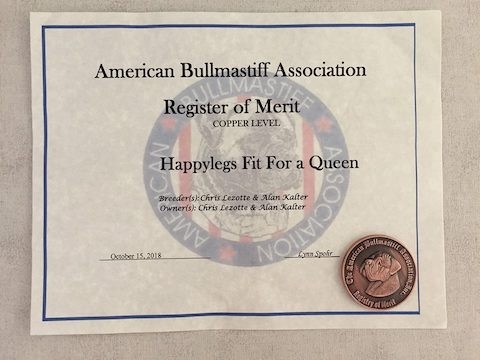 7 years ago while we were at the ABA National ‘Vicky’ escaped from the vet clinic where she was boarded to be bred. We found her in the woods behind the clinic four days later; when it was determined she was pregnant we weren’t sure if she would be delivering puppies or coyotes. Fortunately it was the former, although those pups would forever be referred to as the ‘coyote’ litter.

Vicky earned her ROM earlier this year when son Mac from her second litter finished his championship at five years of age, having been returned to us after his owner’s passing. Although all ROMs are special, this one is especially so.

Congrats and happy 10th birthday to the incomparable HappyLegs Fit for a Queen.